OK – I should have known this wasn’t going to be an ordinary week when I arrived to rehearse one of my clients for the speech and found there were 12 large hairy men waiting for me to choreograph a can-can for them for their annual awards event. I was an ice skater/dancer in a previous career, so no biggie … And as you can imagine, it was quite hilarious.

The next night was our National Press Club Awards and, being a judge of several categories, I dressed in “elegant” dress as the invitation had ordered and drove from Johannesburg to Pretoria to walk up the red carpet at the CSIR Conference Centre. The red carpet, I hasten to add wasn’t for us lowly hacks but for our guest of honour, the Newsmaker of the Year for 2009, one President Jacob Zuma.

I was impressed to see we had been seated just four tables away from the president and accompanying VIPs. We were having a merry time when a colleague and former chairman of the Press Club came over to tell me that we were to move to join the president’s table.

Now this particular gentleman is known as a bit of a kidder, so I laughed, turned around and carried on with the serious business of my rather good pinotage. “No,” came the now slightly frantic voice. “You HAVE to go and join the president’s table NOW!” Unable to miss the mild hysteria in his voice and looking across to our chairman whose eyes were frantically signalling that unmistakable “get over here now”, we bid our tablemates goodbye, quoting Karen of Will and Grace fame, “Oh, look better people.”

This is how I came to be sitting just one seat away from President Jacob Zuma. Turns out a couple of VIPs hadn’t shown up and empty chairs at table number one just didn’t look good.

There were a couple of Tshwane MECs and gentlemen representing the sponsors, our National Press Club chairman – and us … President Zuma’s entourage were, of course, there in full, seated discreetly at surrounding tables, with his personal aide a hands reach away, whilst the much spoken about bodyguards were positioned at strategic points, well away from any “dangerous” media.

Now had I had time to prepare for this momentous occasion I might have thought of some particularly insightful comments or witty presidential jokes, but instead I found myself riveted to this very interesting, articulate, intelligent man.

Our first conversation centred around broken windows. I know, an odd subject, given the many issues one could address our president about. He mentioned that he’d visited a police station that day on a tour of a particular area and how disappointed he was by the state of the station and the fact that surely a bunch of policemen could at least get their broken windows fixed – in fact, he would even fix them himself. I turned to him and reminded him that I was a journalist and he must be careful because the next day’s headlines could read “Call President Zuma if you want your broken windows fixed”. He roared with laughter – he has a great sense of humour and commented that he thought what he said with us that night was off the record.

Well, naturally everything he did that night was carefully noted – by me at least.

He then returned to the table and sat patiently whilst virtually every journalist there came up to have their photos taken. Charm personified – one can understand now how he gets these multiple wives.

But poor JZ – he didn’t even have time to eat his pudding when, virtually straight after his speech he was whisked away surrounded by his entourage, but being warmly greeted by many journos as he left the hall. He’d been there for a whole three hours – which in presidential visiting terms is pretty good value. And sorry President Zuma – I just couldn’t resist the broken window story. Remember don’t ever tell a journalist anything off the record. 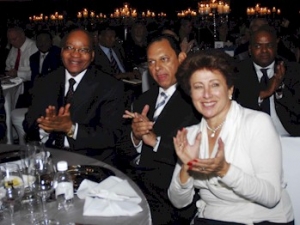